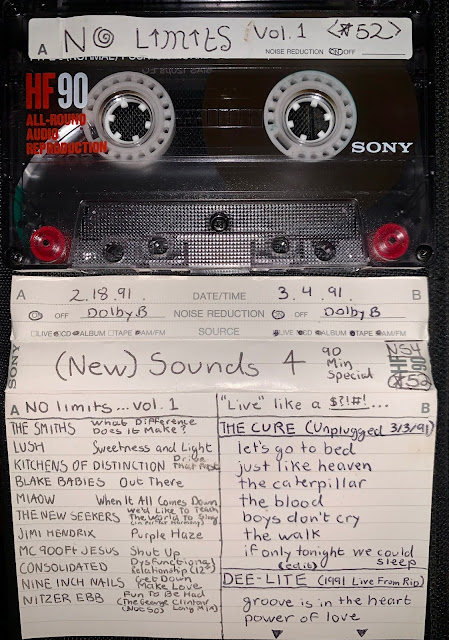 THE SMITHS What Difference Does It Make?
LUSH Sweetness and Light
KITCHENS OF DISTINCTION Drive That Fast (*)
BLAKE BABIES Out There (*)
(*) Steve Masters of Live 105 track backannounce
MIAOW When It All Comes Down
THE NEW SEEKERS We'd Like To Teach The World To Sing
JIMI HENDRIX Purple Haze
MC 900 FT JESUS Shut Up
CONSOLIDATED Dysfunctional Relationship (12")
NINE INCH NAILS Get Down Make Love
NITZER EBB Fun To Be Had (The George Clinton/(Not So) Long Mix)
outro..."You Better Be Careful Out There"
<< Side 1 features quite the variety of tracks, starting out with Morrissey (mope) and Miki (mop).  Once again, Mr. Masters shows up with two great early '90s bands/tracks...the MIAOW was the closest this thing got to my usual haunting grounds, at least until the very end of Side B (see below), and then transitioning to some 60's tracks here (pulled from the original vinyl onto this Sony HF tape), plus the end tracks are all early 90's industrial quasi-classics >>

Let's Go To Bed
Just Like Heaven
The Caterpillar
The Blood
Boys Don't Cry
The Walk
If Only Tonight We Could Sleep (edit)
<< Side B.  Not taken from the bootleg, but recorded when it originally aired >>

Groove Is In The Heart
Power Of Love
<< About the closest these guys got to the potential of their records live, believe this was also aired on MTV >>