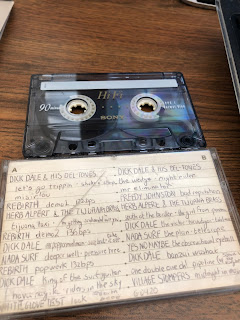 Here's the tape and insert....for a different tape, one that likely won't feature here, as good as at looks.

Only one truly unknown (to me) track on here, but since you got to hear half of the B-side, figure that the three of you that are following this want to know what's on the rest of the tape.  So without further ado....

Unknown classical / early music track.  May have gotten this from an associate of my co-workers who is semi well-known as an early music authority, but only remember this vaguely.

At this point, New Order had been idle for a few years, so hearing this was the next best thing.  This track was and is a banger.  When the Chems opened for New Order in 2005, I was hoping to hear this (The Chems did play it) with Bernard Sumner singing it live (that didn't happen, unfortunately).

Wait, what?  A PE song that namechecks indie bands?

This was from 1999, not 1994...but better late than never.  Never could totally figure out what this was about, you can see for yourself, here.  Guessing it was something to do with lack of respect for their backing tracks/samples?  Quite do like the line Terminator's back 'cause a DAT is whack.

Because they ARE.  You can rest assured that DATs are not going to be featured here.

Prior to their reuniting, Smithies and Fielding together with two others as The Reegs.
Quite loved the lyric to start this one off....As you leave / You can see i don't understand /
So to hell with all of your plans.

They have a YouTube channel ...that shows quite an eclectic mix of Chams-related projects plus...other stuff.  Check it out.

One of the better tracks on the somewhat unfairly maligned Why Call It Anything? At the time, we were thrilled to have them back, and was lucky to catch them in 2000 playing live at Slim's.  Unfortunately, Fielding/Lever/Smithies/Burgess fell apart in 2003...it all famously unfolded in near-real time on the Internet after the band had become incensed that their bassist/singer had accepted an Athens show w/o their consent.  And other stuff.

Not the first time Lush would pull from the Newman/Lewis/Gilbert/Grey canon, and just as good as their cover of 'Outdoor Miner'.  Of course, Elastica would do them one better by stealing the intro hook to their 'Three Girl Rhumba' for the pure commercial hit that Lush's management were chasing and chasing for them, in '96 they played the US no less than three separate times hoping to break what was (and still is, of course) hermetically sealed to anything containing substance and quality.

Glad to see Miki and band reformed again, though sadly, this ran their course, but she's alive and well online.   Check out her terrific Twitter feed.

The Other Two have been generally overlooked in favor of their more out-front brethren in New Order...and their '99 album Superhighways quickly faded into obscurity...until the LTM reissue, this album was actually very difficult to find and commanded $50+.   Very catchy, pop music and vocals from Morris/Gilbert (also 'Gillian + Stephen'), their final (to date) output came in 2011 with Anna + Peter Swing Project 1.

And here's the happy couple together at Amoeba in Hollywood, talking about their quite eclectic selections...anything from Television to JAMC to Sly & The Family Stone to Lana Del Ray to Jeff Beck and Brion Gysin's literature...

Maybe another surprise to appear here (along with PE) but probably not nearly as influential as he should have been for the alternative nation.  His overall antics obscured that he was quite an amazing guitar player, as this track should amply illustrate.

One of the original demos from Propeller Software's softsynth of Rolands TB-303 & TR-808/909 for MS Windows.  Can't easily be played now unless you have MS Windows, as the Mac version was for their classic (pre-OS X) OS and the iOS version was pulled last year after Roland finally put in a claim against them, even when a dozen years earlier they had given their (unofficial) stamp of approval.  Read about it as I did on Wikipedia.

If you're hankering for more, start here: