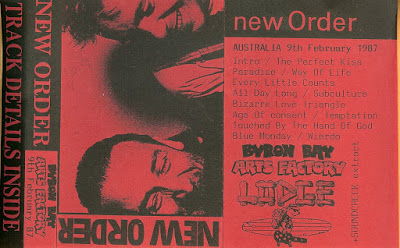 New Order tapes part 5 of unknown
Various and sundry culled from live tapes of the band.  Filler at its finest.

Pictured is the tape where the full recording of this show resides.  These tracks were excerpts from a 90 minute soundcheck and were filler added to the end of this tape, "+SOUNDCHECK excerpt".
This is accounted as the best performance of all of their Australian '87 shows.

An excerpt from my old notes:
Tim C. was an associate who generously spotted me a huge archive of recordings over the years, including many upgrades to recordings that we have out there, which if you know whom to ask or where to look you can find.

As a bonus, here's a MP3 version of the first encore track, Weirdo, from the same old source:

A pretty fast-tempoed version. Barney starts shouting, -screaming- the vocals. "So I got this canopy..." Odd how Monaco's Under The Stars so heavily borrows from this song?

"Just like a lock with a fucking key!" makes its appearance in the vocals.

"THANK YOU VERY MUCH, GOOD NIGHT!" Hooky noodles on bass as the concert draws to an end, playing a bit of Do The Ostrich, it sounds like.

Here are notes for the full soundcheck.   GaoBest is a dear friend of mine.  The Ceremony mailing list archives are found here, which incredibly enough, is still online, and if you have a day or three, you can go ahead and read what's on there and be more knowledgeable about New Order than you were before you did so.

Somewhere on there, you can read a posting describing the following: A bit of a change of pace, we have a pair of My Bloody Valentine Peel Session tracks.  This copy of these two tracks are "OK" quality, and comprise more filler tracks from the same cassette.

Here's a link to the Discogs entry.  And another one (on CD).  As it's unofficial, you can't buy this via their marketplace, but again, if you know where to look and/or who to ask, this is readily obtainable.

And as another bonus, here are MP3 versions of Lose My Breath and a third track, When You Wake Up, You're Still In A Dream.  Quality as you may expect favors the MP3 versions.

And my notes for these.... "SCF" = soundcheck filler, as originally annotated.  For presentation purposes, I've reversed the order that they appear.

Fairly certain that SCF1 (track 06 above) is just the 4:11 version, but recorded via high-speed dubbing so it sounds like Alvin, Simon, and Theodore got to it.  As for SCF2, this is probably a custom fade-in/out of the 1986 3:58 instrumental mix...also with some Chipmunk tinkering.

The following are filler on another "UKBT" tape, from a 1985 Hammersmith Palais live recording. 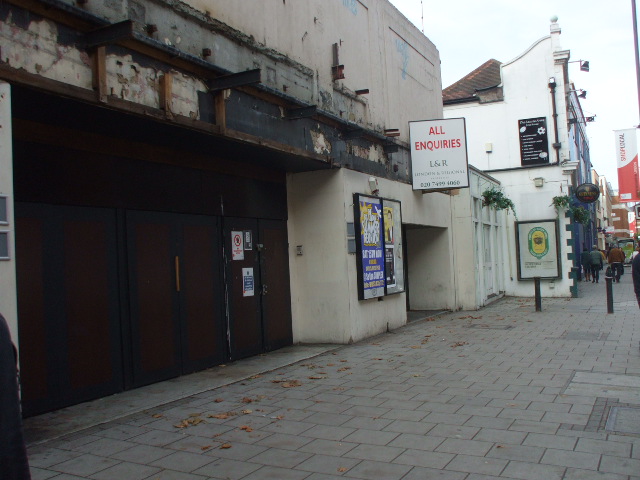 A mystery 1983 live recording of Blue Monday, super heavy on the echo FX, and quite a terrific version....alas, it cuts short.

Another one to fully identify.  Ten years ago, I'm sure I would have had the wherewithal to attempt it, but now I accept certain things to remain a mystery.

This as well.   Not much to say for something only 8 seconds long.