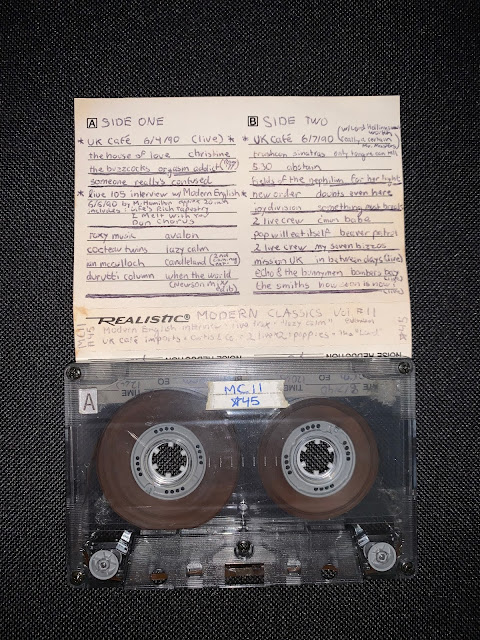 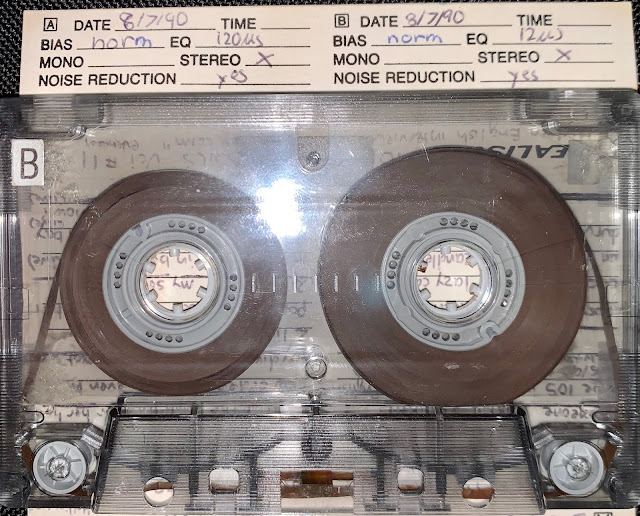 UK Café 6/7/90
Featuring Lord Hollingsworth, which was really Steve Masters in an endearingly silly skit that bookends some really good tracks.
Trashcan Sinatras - Only Tongue Can Tell
Five Thirty - Abstain
Fields Of The Nephilim - For Her Light
Excellent dark JD/NO linking tracks
New Order - Doubts Even Here
Joy Division - Something Must Break
Then we go somewhat off the rails...
2 Live Crew - C'mon Babe
Pop Will Eat Itself - Beaver Patrol
2 Live Crew - My Seven Bizzos
Live tracks, which unfortunately I couldn't transfer
dating from 8/7/90 when this was finalized
Mission UK - In Between Days (live)
Echo & The Bunnymen - Bombers Bay (live)
The Smiths - How Soon Is Now (live)

<< The end of the Mission UK track (a Cure cover!) features glitches meaning the transport wasn't able to turn the reel.  I tried changing these into a different shell but still have the same problem so think I'll have to re-spool this which I'm not really equipped for unless I buy something which can play cassettes like reels.   At least that allowed me to get that one dubbed.  The others I think are available online.  I don't think the 8/7 date is a typo, I probably did have this sitting around for two months off with some space to fill at the end...perfect for TAPEFILLER.ORG >>

Echo & The Bunnymen - Bombers Bay (live).  Fairly sure it was this version.

The Smiths - How Soon Is Now (live).  Fairly sure this would have been from Rank as these versions were copied from my records/CDs.