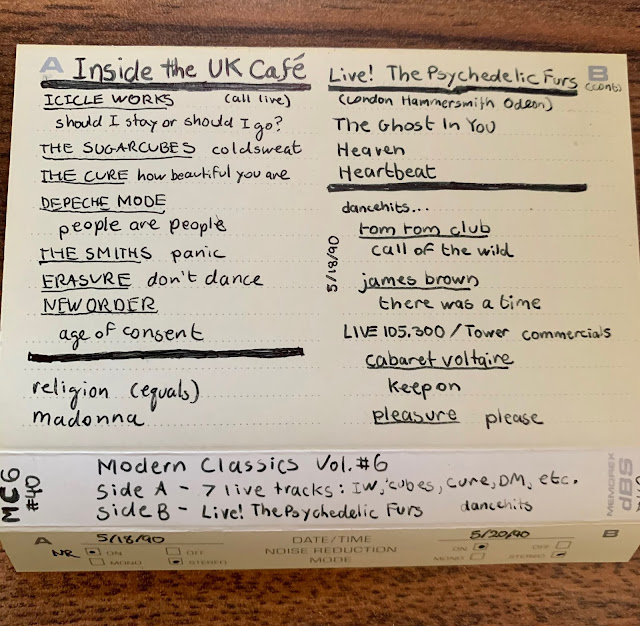 << First of a series.  I thought of looking for #1, but that would have taken you back to 1981 and very rough recordings done with a small transistor leaned up against the mic of an old Realistic tabletop mono recorder.  You would have heard a 9-10 year old me play at DJ.  Be thankful that I took it no further, not even deciding to pop on our local university radio station, little did I know that they would have probably let me on...didn't help that I commuted and didn't live on campus.   So, instead I pulled out my early 90s set...one of a series of maybe 10-12 tapes... >> 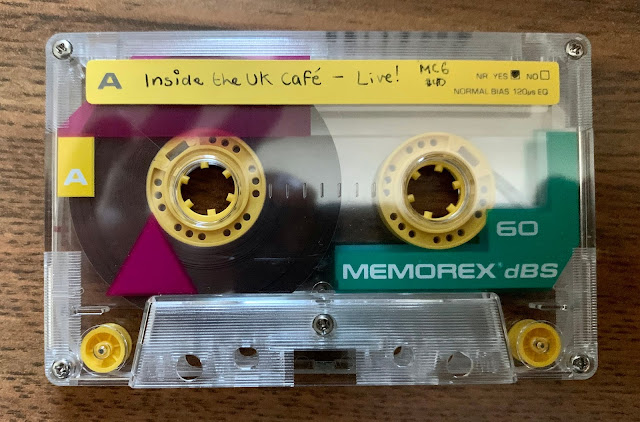 These were aired as part of Mark Hamilton's "Inside The UK Café", and were all live.  Icicle Works covering the Clash in 2020 is a bit of an eye-opener.  The Sugarcubes and Cure tracks are *great*.  Click on the above link if you want to sample any of the below listed tracks.

Icicle Works - Should I Stay Or Should I Go?

The Cure - How Beautiful You Are

I augmented these with the following, which were on CDs (DM / The Smiths / Erasure) or bootleg (New Order).  Obviously, all are classics of the genre. 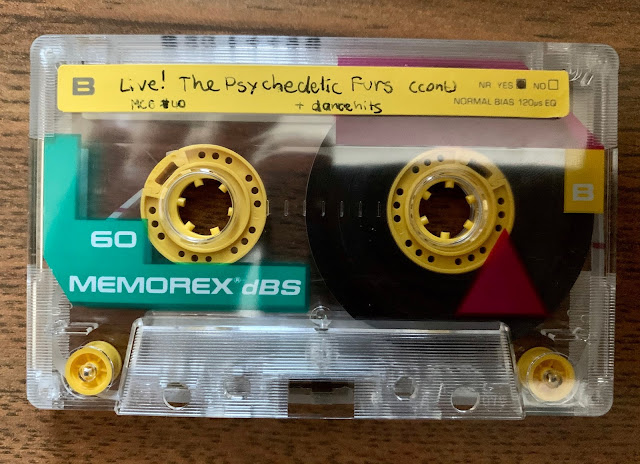 Live Psychedelic Furs - Sunday Night Live (aired starting 8PM)
The Ghost In You
Heaven
Heartbeat
The actual source tape the radio station used seems to have been chewed up.  They were supposed to have been using a transcription LP, but this is probably a cart dub onto a tape that has seen better days.
I had thought the pretty low-grade MEMOREX(R) dBS was responsible, but doesn't appear to have been the case.
Tom Tom Club - Call Of The Wild
I don't remember having a CD of this, so a bit of a mystery, perhaps it was a disc I had borrowed from our local library at that point.
James Brown - There Was A Time
Digitized from LP, I must have sped it up by hand at the end.
Live 105.300 / Tower Commercials
Probably of interest to fans of this "Modern Rock" radio station to hear in-station promos for the 300 biggest songs in Modern Rock history for Memorial Day 1990.  $1000 cash grand prize!  Sponsored by Gingiss formal wear.   This one starts off with "Fine Time" by New Order and includes LWTUA and a few other songs which were probably in the top 50.... this is followed by a Tower Records ad featuring the Silos and Stone Roses s/t albums.  And a 4 day vacation to Cancun.
Cabaret Voltaire - Keep On
As introduced by the one and only Steve Masters.
Obviously not his real name, it's a long one starting with M and ending in "cyz" if memory serves me.
Quite a crazy biography and I have to credit him with helping shaping my listening tastes.  For folks in the UK, the juxtaposition of some of these bands would seem unnatural, but in large part it comes down to the tastes of this one man.  His website features samples of him radio work back when he briefly had (in 2013!) his own radio show.  Man, wish I knew about it, it would have given me a reason to turn on the radio again.
This Cabs song still sounds wonderful to these ears, their late '80s Groovy, Laidback, and Nasty material is underrated!
Pleasure - Please
This project was very brief in duration, and appeared on the same label in the UK (Anxious Records) that had Curve and Londonbeat.  Didn't know that at the time, of course.  More info