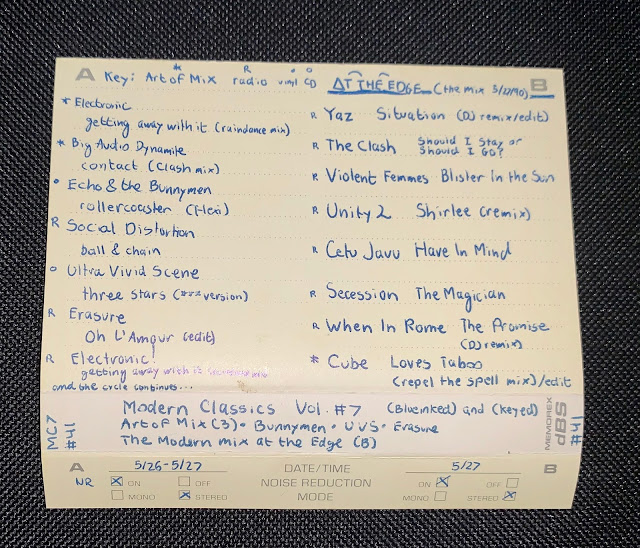 << Second in a series.  Looks like this was assembled the following weekend to the one featured previously.  Another example that mixes an Art of Mix 12" which I still have, some CD tracks from a semi-portable tabletop that I bought back in '89 (note the 16kHz line which appears in the waveform tracks), and the rest from trusty old 105.3FM in San Francisco, Live 105.  The Side B tracks were aired in dance mix style at the Edge in Palo Alto.  My recollection was that this was an early (Sunday) morning broadcast with Mark Hamilton, who was at the station until 1995, and then departed to Portland's KNRK to serve as their Program Director, where he is still at, apparently.  Despite rumors that he was either from Ohio or Mississippi, he's an English expat, one of a number the station had.   That station no longer plays "Modern Rock" but some more generic brand of "Alternative" music. >> 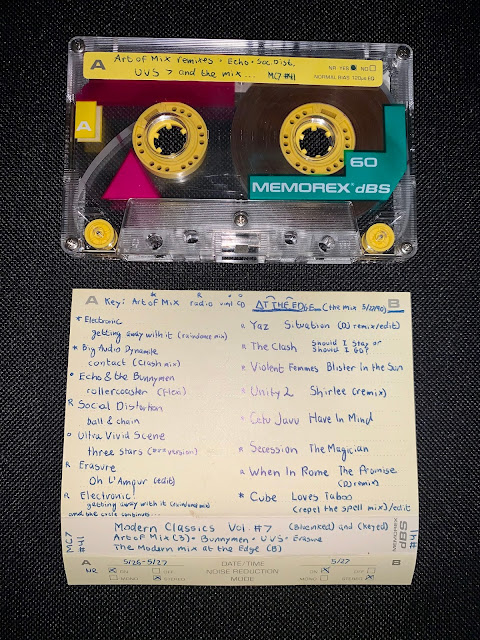 Å  Electronic - Getting Away With It (Raindance mix)

Side A tracks of this Art Of Mix 12", which according to Discogs was apparently on transparent vinyl.  Funny, I don't remember that mine was that way, but sure enough, pulling it off the shelf, it's indeed a brown transparent color!

This was taken from the 1987 tour flexi with New Order and Gene Loves Jezebel tracks on it.  Interesting in that it's in the very rare 9" format.

Mike Ness' band: mostly overrated, though I did like their version of "Ring Of Fire"

Kurt Ralkse's band: very, very much underrated, especially their earlier stuff.  Along with the Pixies and Throwing Muses, one of the best American 4AD signings before the label essentially became an American imprint.

R  Electronic - Getting Away With It (Raindance mix)

"and the circle continues..." very neat to see that the Live 105 DJs had the same mix platter that I had... 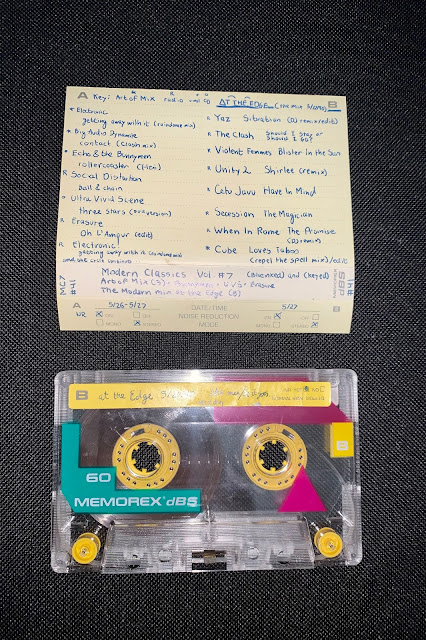 R  The Clash - Should I Stay Or Should I Go?

R  When In Rome - The Promise (DJ remix)

All of these tracks taken from "At The Edge" live broadcast from The Edge club in Palo Alto, formerly known as one of the Keystone clubs, and then the Vortex.  At the turn of the 21st century, it was remade into an upscale restaurant & nightclub called Illusions, and then was demolished in 2013 to make way for an office building.

At a couple of points you can hear Mark Hamilton broadcasting from there, although I'm not sure if he was behind the Technics here.   Perhaps it was a pre-recorded Masters mix (actually, some guy named "Bernard" was responsible for the mix, whatever it is it's a classic run of songs and brings back memories.  I've bookended this with a Cube song that goes well with the others, which is the second B-side track on the Art Of Mix 12".  I guess I ran out of room to include the Impedence track, which I also have on a CD promo somewhere.

Masters Mixes for you to check out

(posted by the Live 105 Alumni group)