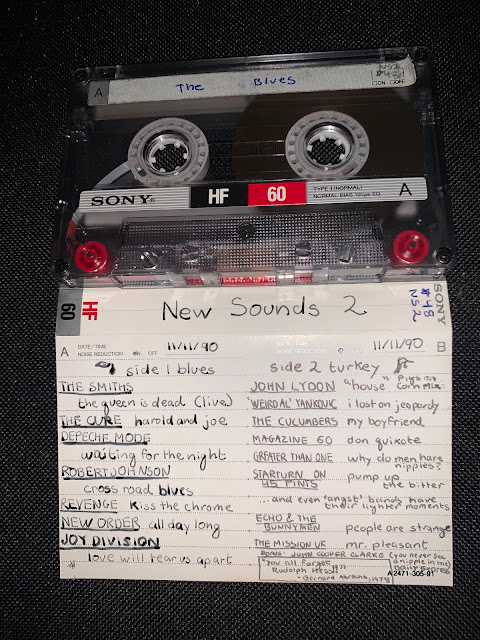 A great selection of melancholy modern rock hits from my CD collection at the time.
Yes, I owned the old Columbia Robert Johnson box set, which was notoriously noise reduced, as I understand that transfers done directly from the 78s sound a loss less dead than this seems to.
"Harold And Joe" is another Robert's paean to a different drug than what his fellow Robert was imbibing, and not one associated with the blues as traditionally defined.  Love the dying pen highlighting only certain strokes.
"Harold And Joe", "Waiting For The Night" and "All Day Long" are all deep cuts and are favorites of mine from these bands.  Everybody knows the last one, of course. 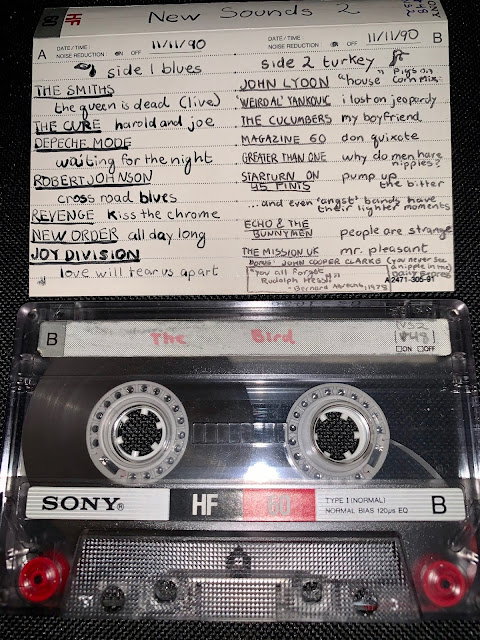 These are all in large measure joke tunes, but all of the have quite interesting backstories, so I'm taking the time to present them here.

The Lydon one was taking from an '86 era interview with Ivar Hamilton and edited into a house tune by somebody at Virgin ("Pigs On Corn") possessing a quite demonic sense of humor, as it's taking the piss out of Johnny Rotten as much as it is from the hapless Canadian interviewing him.  Something tells me this may be Johnny himself...this has long remained a mystery as to who performed these edits.  This was quite hilarious back then and still remains so and is essential for any Pistols / PiL fan to have, and can be found for cheap too.

'Weird Al' Yankovic is an American legend and no measure of my writing can do justice to how important his is to culture in general.  I won't even deign to try here, if you need to know why, here's one of several articles that delve into this theme...just enjoy the video of this tune.

And here's The Cucumbers' "My Boyfriend" in a quite irrepressible video.  This was husband and wife duo Jon Fried and Deena Shoshkes.   This was their college radio hit.  Well, it made it to alternative radio, think that's Lori Thompson from Live 105 introducing the tune....think this and the GTO and So45P were from Live 105 broadcast as well.

Magazine 60 were a French synthpop band.  The song featured here is their best known song, which on their release is spelled in Francophone style "Don Quichotte".  I've kept the spelling as-is here, with the proper X, but if you like it spelled the other way, here's a promo vid of them with that spelling used.  Yes, as a smart YouTuber points out, this was awesome in 1985 and is still awesome in 2020.

Greater Than One, like the Cucumbers, was another husband-and-wife duo, Michael Wells and sadly deceased Lee Newman, of cancer in 1995.  G-Force, their 1989 album is probably their most well-known work.

Star Turn On 45 Pints are too still around, being from Tyneside, with "Pump Up The Bitter" (gloriously using the M/A/A/R/S tune as sonic backdrop) being their most well-known pilfer.

Here's a well-worn VHS copy but all-you-can-wish-for yeet o' cheese from the lads, the Ofra Haza imitation on here being especially gloriously cringeworthy.   Utter bullocks but the dogs bullocks too...

Found a non-chewed up version but sans the endearing comments the top one does...

Not going to belabor this writeup-up with any attempt to describe The Bunnymen covering the Doors or Wayne Hussey's Mission performing the Kinks' tune, curious choices then and now.  Okay, I lied, here's jolly Wayne performing this in 2014.

I did do a bit of sonic surgery on the very end of my tape which has Bernard Sumner's famous proclamation YOU'VE ALL FORGOT RUDOLF HESS which I looped after John Cooper Clarke's shining moment by cleaning up the gaps in between repeats due to lack of good audio software available to me in 1990, as this was from their one song on the Virgin "Short Circuit" CD taken from the last night at the Electric Circus.  Looks like their set was only 3 songs long and only this and Warsaw were recorded, if memory serves me.

(from Control)
(from the Virgin CD release)