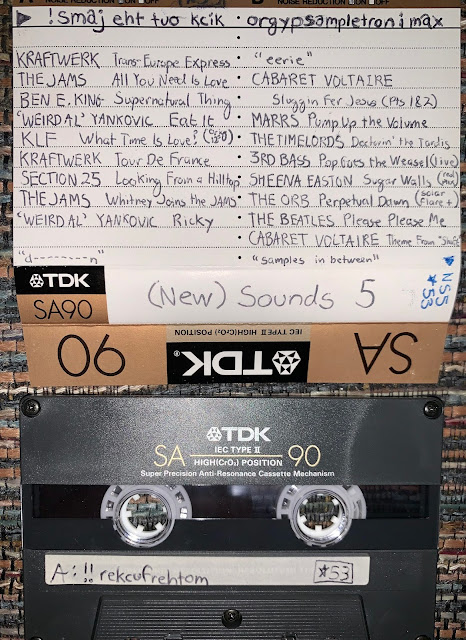 !smaj eht tuo kcik (9/91)
KRAFTWERK Trans-Europe Express
THE JAMS All You Need Is Love
BEN E. KING Supernatural Thing
WEIRD AL YANKOVIC Eat It
KLF What Time Is Love? (Orig 12")
KRAFTWERK Tour De France
SECTION 25 Looking From A Hilltop
THE JAMS Whitney Joins The JAMS
WEIRD AL YANKOVIC Ricky
filler
Why Are Palestinians So Attached To Arafat
<< The last entry was recorded dialogue between myself and my father, which to 2020 ears sounds positively quaint.  Good question on my part though.  I was coming at this from a Leftist perspective, I thought (and still think) Arafat was irredeemably corrupt, that the PLO was compromised from early on.
Oh well, even thinking about the Middle East seems to be a luxury these days!
The rest of this is fun, and about the time I developed a JAMS/KLF fixation, but the weirdest track of the bunch being the one from Ben E. King, which I took off a scratchy 7 inch.  Yes, this is the vocalist for "Stand By Me", getting all funky with it.  Here's the man performing on "Soul Train" definitely lip-syncing, as this sounds exactly the same as my record.  He only passed away in 2015. 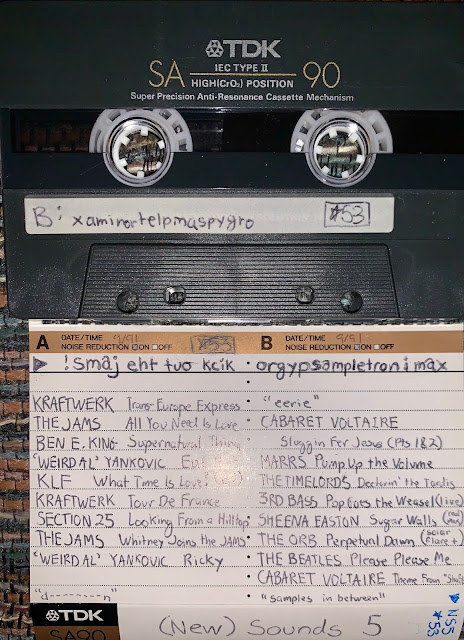 "eerie" (sample)
CABARET VOLTAIRE Sluggin Fer Jesus (Pts 1& 2)
M/A/R/R/S Pump Up The Volume
"standup comic" (sample)
THE TIMELORDS Doctorin' The Tardis
3RD BASS Pop Goes The Weasel (live)
"the intern" (sample)
SHEENA EASTON Sugar Walls (red mix)
THE ORB Perpetual Dawn (solar flare+)
"arlen spectre of death" (sample)
THE BEATLES Please Please Me
"military air exercise" (sample)
CABARET VOLTAIRE Theme From Shaft
"late nite" (sample)
<< at some point in the future I'll feature a mashup mix I made with some of these songs >>
Never watched the M/A/A/R/S video, so here it is.  According to one YT comment, this track has something like 250 samples!  The video mix is different than the version I'm used to, it appears this is the UK edit and the one that was constantly played was the US one.  Neat.
Sheena Easton and her "Sugar Walls"
Choice YT comments:
Me: "Something this funky and this overtly sexual has to be a Prince song." checks Wikipedia
Me: "Never in the history of obvious has something been this obvious."
"remember when i was kid and the moment i figured out what sugar walls meant. My godmother seeing i had figured this out looked at me laughing and said 'she aint talking about no gingerbread house baby'"
"Prince wrote "Sugar Walls" for Sheena Easton under the pen name "Alexander Nevermind." The song hit No. 9 on the Billboard Hot 100 in 1984."