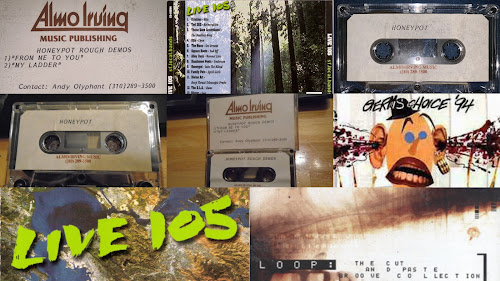 A collection of all known releases from SF group "Honeypot", which I featured a live recording of on 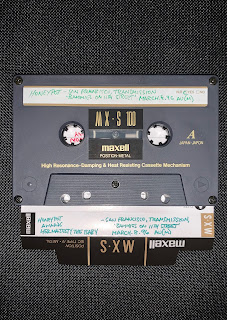 my Facebook channel a while back, at the Transmission Theater back in 1996, where they played alongside cohorts Her Majesty The Baby as part of the Bammies.
Honeypot consisted of vocalist/guitarist Cynthia Isabella (Mansourian), who also sang in a group called the Bel-Fires along with lead guitarist George Steeley back in the 80s, and drummer Jon Righthouse, whom featured in more adventurous fare being in groups called Fuckface and Cops.
Firstly, a list of three tracks that appear on various compilations.  Per Discogs, there are no known single or LP releases documented for this group.  I was waiting for all of these arrive hence the FLLR index number being lower than the prior two sharings...
1)  "I Need That Sound", from Germs Choice '94.
2)  "Into The Blind", from Live 105 sf.local.bands compilation, 1994.
3)  "Happiness Hangover", from LOOP - The Cut and Paste Groove Collection compilation, 1998.
HONEYPOT >> compilation trax 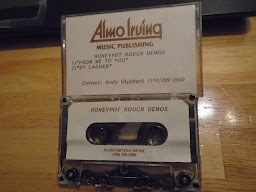 Secondly, a pair of demo tapes that I acquired.  I think these date from 1992 or so.  I've submitted them to Discogs.
The first is a two track demo tape with songs "From Me To You" and "My Ladder".  You can sample/download here...
HONEYPOT >> TWO TRACK demos. 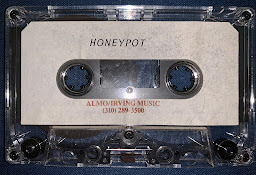 The second is a four track demo tape with songs "G-Girly Girl (I Love You), "I Wanna Be That Way (So Sweet)", "Going, Going, Gone" and my favorite of them all, "I Lock The Door".  The seller I acquired these from included the tracklisting, as the tape itself was otherwise note annotated.
HONEYPOT >> FOUR TRACK demos.
The only thing on YouTube I found for Bel Fires I found...aired on MTV2 back around '88 or so...and very pop-gothy...  there's a 12" and minialbum on Discogs which I just put in orders for and will feature once they arrive...that's how this thing works, pull the string and see where it takes you!
Bel-Fires demos Honeypot