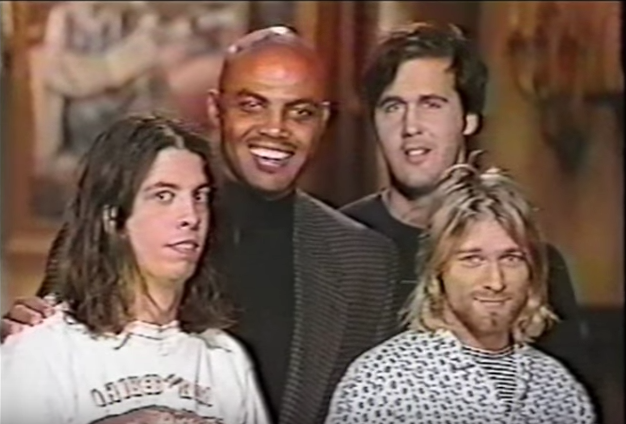 pic via Howsyourmorale.com
From a tape digitized back in 2000, which was just an audio capture of things I have on video, done before MP3 players existed and your K7 was the format to play music on the go.  Have all the original videos of course, but most of these are online already.  Link to download/stream all this at the bottom, so you'll have to make it through my writings, or you can just scroll down...
A rundown of what's on this...
01 - The Breeders - Divine Hammer (live CO'B)
02 - The Breeders - interview (CO'B)
One of his first musical guests, legendary for the hickeys!  Probably the sloppiest guitar solo ever heard on television, bless Kelley Deal.
03 - PJ Harvey - Rid Of Me (live CO'B)
04 - PJ Harvey - interview (CO'B)
I had long misattributed these to also being from Conan, but it was actually from the more stodgy Jay Leno Tonight Show outfit, but credit Jay for having the "balls" to allow Polly Jean to describe her Dorset farm chores, one of which was to geld muttonlings...
05 - Generation X - My Generation (intro by Debbie Harry)
06 - Debbie Harry outtakes
This was Debbie Harry introducing the band filmed at the Astoria in London, "17 years later", which actually matches to 1993....  so not quite accurate on my part to lump this into a 1992 compilation.  The sight of Billy Idol with dreads can never ever ever be unseen, I'm afraid.  At least the footage is grainy enough to imagine that this was just sweaty locks rather than appropriation.  The Debbie Harry outtakes are pretty bad too, whether accidental or what started to happen increasingly with folks faking outtakes just for the sake of having them.
07 - Nirvana - Heart-Shaped Box (live SNL - Charles Barkley intro)
08 - Nirvana - Rape Me (live SNL - Charles Barkley intro)
Nirvana once played SNL with Charles Barkley hosting.  Not performing "Smells Like..." which the band were done with, but a song called "Rape Me".  Oh boy, did they ever.  And you thought 2020 was crazy.

There's actually quite a bit online about this quite surreal pairing.

Sbnation talks about this was after Michael Jordan spanked Barkley's Phoenix Suns.

"How's Your Morale" transcription of the proceedings.

And Charles himself has opined on it, you can search these out for yourself.

The copyright enforcers at whoever owns Nirvana's rights these days (UMG) got to the older versions put up, but there's this short clip.

These rehearsal versions are still online, though.  I wonder if the "Soaked In Bleach" account was associated with the documentary by the same name.  I don't have time here to get into all the controversy Cobain's end seems to have engendered.  Knowing how this year has been I'm sure we'll be soon be given proof that both 9/11 was an inside job AND Kurt was killed by his ex-.

Next up...what I view as the centerpiece of what I'm offering here...
09 - Juliana Hatfield - Interview with Alex Bennett 105.3FM 1
10 - Juliana Hatfield - Supermodel (live acoustic Alex Bennett)
11 - Juliana Hatfield - My Sister (live acoustic Alex Bennett)
12 - Juliana Hatfield - Interview segment 2
13 - Juliana Hatfield - Spin The Bottle (live acoustic Alex Bennett)
I know that Alex Bennett (who's over 80 but still going strong) is not everybody's cup of tea, but he is 100% truthful when he claims that Howard Stern stole his schtick.  Spent many a morning listening to him on Live 105.  NYC has him now and still does his thing on gabnet.net.
The performances from Juliana and the exchanges with Alex and sidekick comedian (maybe Larry "Bubbles" Brown, going off of memory here) are wonderful...this version of Spin The Bottle is jaw-dropping good.  All of this is a must-listen!
14 - Belly - Gepetto (live CO'B)
15 - Belly - interview (CO'B)
My god, 1992 was simply one hell of a year for music....  just imagine the absolute dross we get now when before late night would be graced with amazing artists like Nirvana / PJ Harvey / The Breeders / Belly...
"Live classics from the Cutting Edge" next up, these were audio-only, and pulled from PCM Hi-Fi VHS "masters", which is another long project that awaits me.... Gems from the following older generation of alternative musicians.  The Elvis C. tracks are especially enjoyable...
16 - Iggy Pop - Lust For Life (live)

Think the full show is available here:
https://www.mixcloud.com/sinlopez/elvis-costello-and-the-attractions-1984-08-11-philadelphia-pa/
23 - The Pretenders (intro Matthew Sweet) (live NYC 1983)
24 - The Pretenders - Precious (live)
25 - The Pretenders - Brass In Pocket (live)
26 - The Pretenders - Mystery Achievement (live)
Not sure if these were the US festival tracks...but considering they had undergone quite a bit of tumult with the loss of their original bassist and guitarist due to the effects of drug abuse, it most likely was.
Anyway, here's the full set on YT:
The following I don't 100% remember, but tape doesn't lie...
91 - ephemera 1 - grounding hum + brief hip-hop style linking piece [0:06]
92 - ephemera 2 - acoustic guitar dribblings from yours truly, which isn't bad for somebody who can't really play [2:23]
93 - ephemera 3 - Almond Joy ad fragment [0:10]
94 - ephemera 4 - "Yeah, Motor..." ....this is from a song intro which neither myself nor Shazam can place... [0:37]
And finally, these utterly ubiquitous filler tracks, which you all should be familiar with.  Think these were the same digitizations used on FLLR 023, though I didn't trim off 10s of blank space following the conclusion of the Flesh D-Vice track.
98 - The Mark Of Cain - Can You See Now
99 - Flesh D-Vice - Transmission