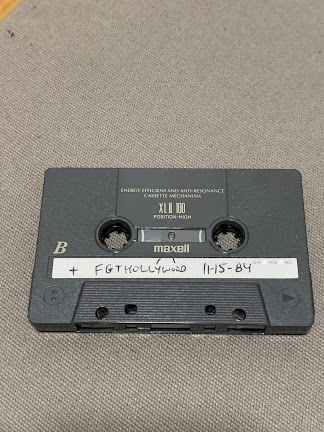 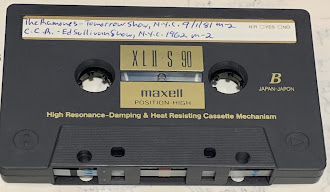 FLLR031
New Order Tapes
Part 13
In homage to this... FAC321, the numbering for New Order's "Perfect Kiss" video...
The first bit is some distorted classical music likely left as part of a type being recycled for live music capture.
The next song is "In The First House", by Leeds UK outfit Circus Of Fools, whom journo / writer / NO tape trader Dave Simpson drummed for, not to be confused with the German death metal group founded in 2006.
These demos would be circulated at the ends of tapes he would copy out during the 80's, hopefully to be appreciated in the far distant future, which would be now in fact.  There's otherwise next to no information about them online, besides what Dave himself has told me directly, that they went through a couple of singers....with this track I think featuring their first... 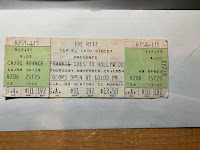 This is followed by a live track of Frankie Goes to Hollywood playing "Relax", recorded at the Ritz in NYC by a taper known as DT, at least as best as I've been able to gather...  Here's an NY Times article about the show, which while liking the more Hi-NRG numbers, wasn't exactly complimentary toward the frontman.
"That was a thing of beauty", indeed, nicked from a live New Order recording in homage to the departed Ruth Polsky, a topic to explore for another time.  Read Hooky's Substance - Inside New Order if you wish to learn more...a group that gave Led Zepplin a run for their money for debauchery and whom Sex Pistols / Public Image frontman Lydon famously claimed did more drugs than the Grateful Dead.
Next we have a trio of Ramones songs recorded on the Tomorrow Show, dating from 9/11/1981, but not with Tom Snyder but a lady guest host who probably has little gabba gabba hey for what she's in for.
The full thing is up on YouTube here, with the quality on there being much better than my second-gen recording I have...  These are "We Want The Airwaves", "I Wanna Be Sedated", and "The KKK Took My Baby Away"
This is followed by a couple of CCR tracks from the Ed Sullivan show in 1969.
A writeup about this can be seen here, on the Ed Sullivan show website.
This links to a 40 second sample of "Down In The Corner", which you can view here:
I'm sure there's a pricey DVD out there or whatever thing whoever produced this wants to sell you with the rest of it, but if you're not wanting to hunt it down, you can just make do with this tape filler, which is also a second-generation dub, all available in the link below:
FLLR 030 - New Order Tapes (part 13)
CCR Circus Of Fools Frankie Goes To Hollywood live new order The Ramones